On World Sight Day, Canadians are being called to recognize the risk of mandatory switching that may limit their eye care

In advance of World Sight Day on October 13th, the International Federation on Ageing in partnership with national and global organizations wants to drive action for eye care, to improve the situation for those impacted by vision loss and blindness, now, and in the future.  While global agencies support initiatives to improve, restore, and maintain vision for people around the world, many Canadians need to prepare for policy changes about their eye treatment that have the potential to impact patient and physician autonomy.

In alignment with the IFA’s position statement, the Canadian Ophthalmological Society (COS) published guidance on the use of biosimilars in the ophthalmic setting, reinforcing the need at all times for the physician to determine the most appropriate management and treatment plan.  The COS statement highlights that “the physician-patient relationship and a patient’s resulting confidence in their treatment plan are crucial to successful treatment.  Limiting choice and mandating changes to existing successful treatment regimens undermines that confidence and could be detrimental to patient care .”

“We’ve seen the impact of policies that favour cost savings over patient care, it has a cascading effect detrimental to the person and their overall health and wellbeing. Loss of vision has been linked to loneliness, social isolation, and feelings of worry, anxiety, and fear,” says Dr. Jane Barratt, Secretary General, IFA.

“The Canadian Council of the Blind (CCB) believes that those of the 1.2 million Canadians living with vision loss who are currently being treated with biological medications, as well as those that will be treated in the future, should have the option of being treated with the best possible medication for their condition.  Decisions on which medication is most appropriate should be based on their ocular condition alone and not on cost,” describes Jim Tokos, National President of the CCB.

“Short-sighted policies aimed to save costs put patients at risk,” explains Gail Attara, President and Chief Executive Officer of the Gastrointestinal Society.  “We have witnessed how switching medications in other health areas to so-called cheaper ones actually resulted in increased expenditures in other areas of health in British Columbia, i.e., more physician visits, more lab testing, and treatment in the emergency room, which negatively affected the health of more than 25% of patients.”

“The Alliance for Safe Biologic Medicines (ASBM) supports the introduction of biosimilars as an important tool for offering patients new therapeutic options and reducing healthcare costs.  The tremendous success of biosimilars in European markets has shown that countries need not sacrifice physician and patient’s choice to enjoy substantial savings.  This is accomplished through competition between many reimbursed products, rather than forced switches.  Physicians and patients in Canada deserve no less – yet they are increasingly seeing their choice restricted rather than expanded.  With the arrival of ophthalmic biosimilars, we must heed the concerns of these physicians and their patients regarding unnecessary switching, so that we do not risk long-term harm to patients for short-term savings” states Michael Reilly, Executive Director, ASBM.

There is no doubt that efficiencies in our health system are required, and the IFA recognizes and supports important measures that will identify cost savings in one area so that resourcing can be reallocated benefiting more patients.  As organizations advocating for vision health, we remain concerned about policies mandating the use of medications which appear to be largely based on the cost that may limit and restrict a physician from treating their patient with the most appropriate medicine, based on their expertise. “We have trust in our doctors who take an oath to protect a patient’s health, then why would we restrict their ability to do their job properly?  While biosimilars provide greater options for the patient, non-medical mandatory switching of ophthalmic medications may negatively impact patients whose vision while using the original drug is stable,”  says Dr. Barratt.

Insufficient data on ‘non-medical switching’ remains a point of contention, according to policies that have already been enacted in other provinces, such as Alberta and British Columbia.  We are in agreement with the COS and American Academy of Ophthalmology (AAO) that call for more data, “given the unique immunological environment and limited tolerance for inflammation which exists with direct administration of the medication into the eye.”  The COS also “cautions against mandating large scale, automatic shifts from the reference to biosimilar medications until sufficient human experience has been accumulated to ensure confidence in safety.”

The IFA, in partnership with national and global organizations as advocates for options in eye health, wants Canadians to recognize the potential risks involved in mandatory switching to biosimilars, and how they can ensure their health rights are not restricted.  Patient and physician’s choice need to be respected and, while a focus on health system efficiencies is important, it should not be employed at the cost of a Canadian’s eyesight. 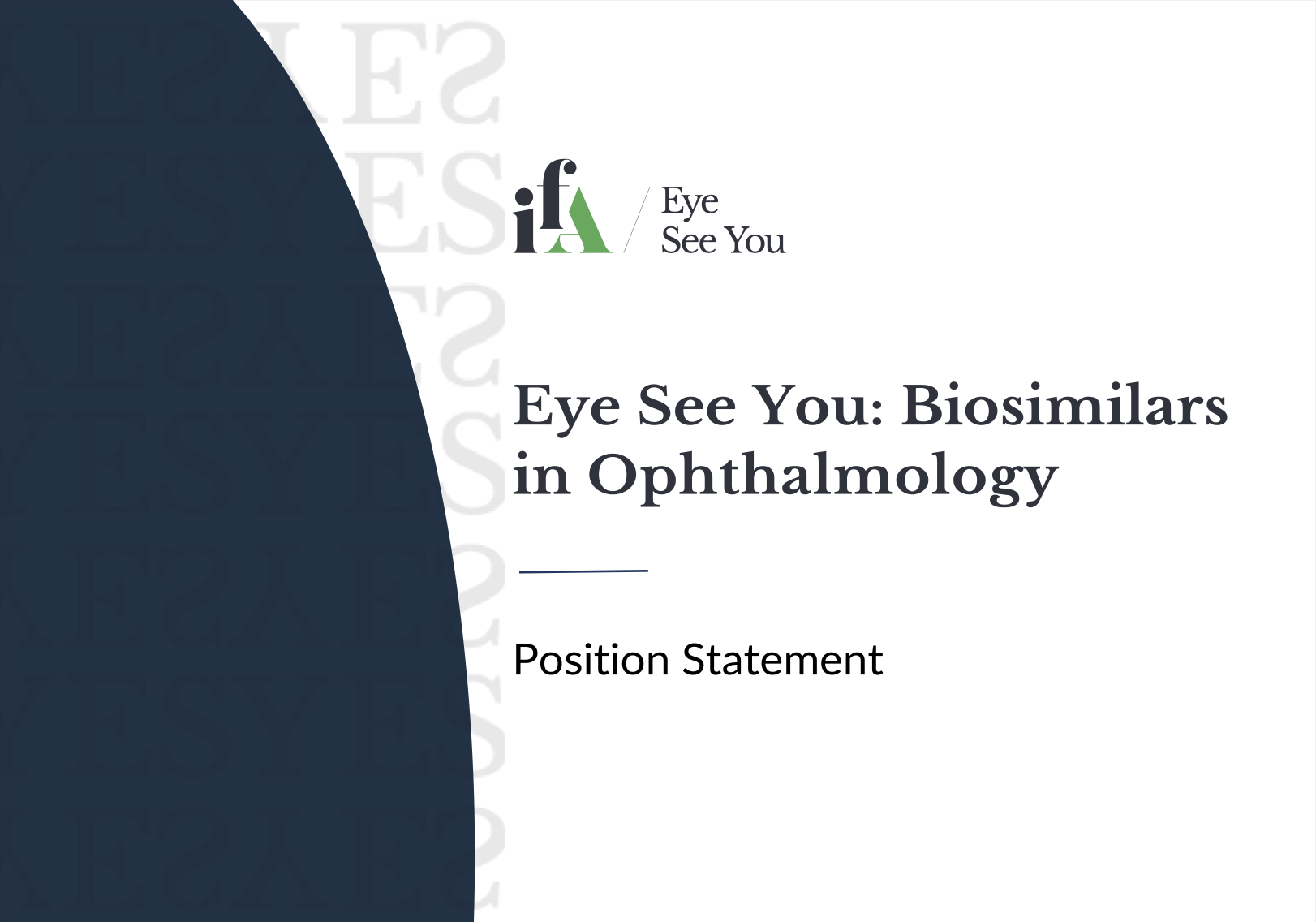 The IFA has created the following Social Media kit to help organizations for older adults share impactful information to their members. 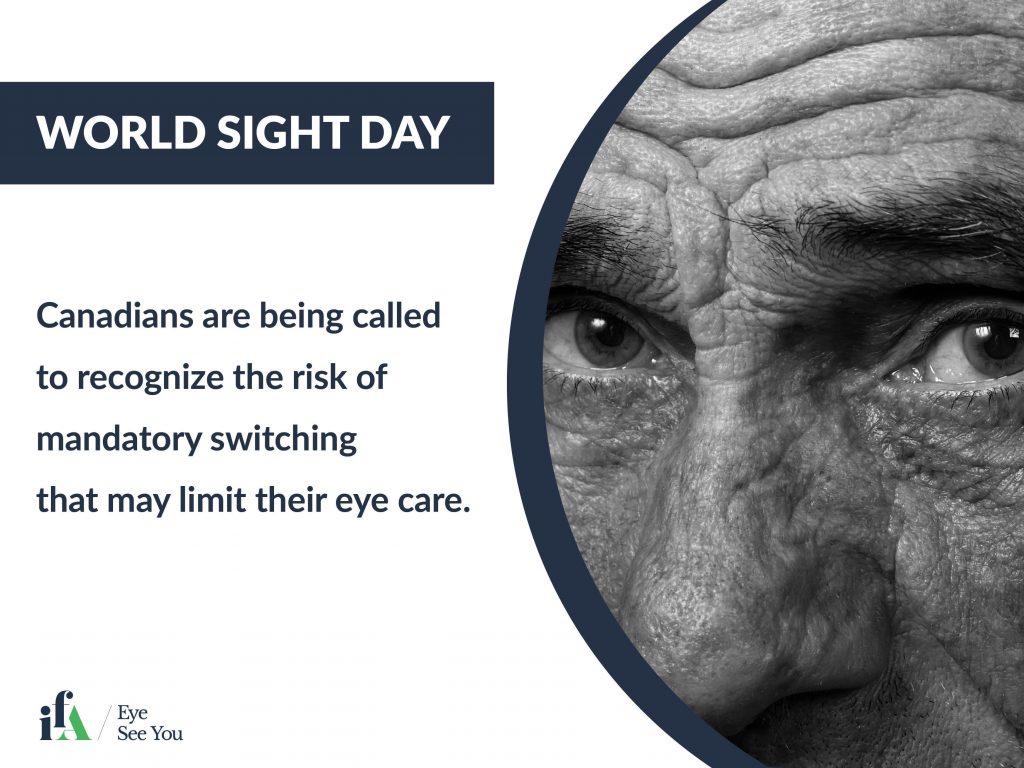 Maintaining and improving the vision of Canadians through appropriate therapeutic interventions is a good return on investment for society across all ages, and to mark this World Sight Day, IFA is proud to contribute to focusing attention on the national issue of eye health. Learn more: bit.ly/3So7JWW #IFA #vision #health #biosimilars 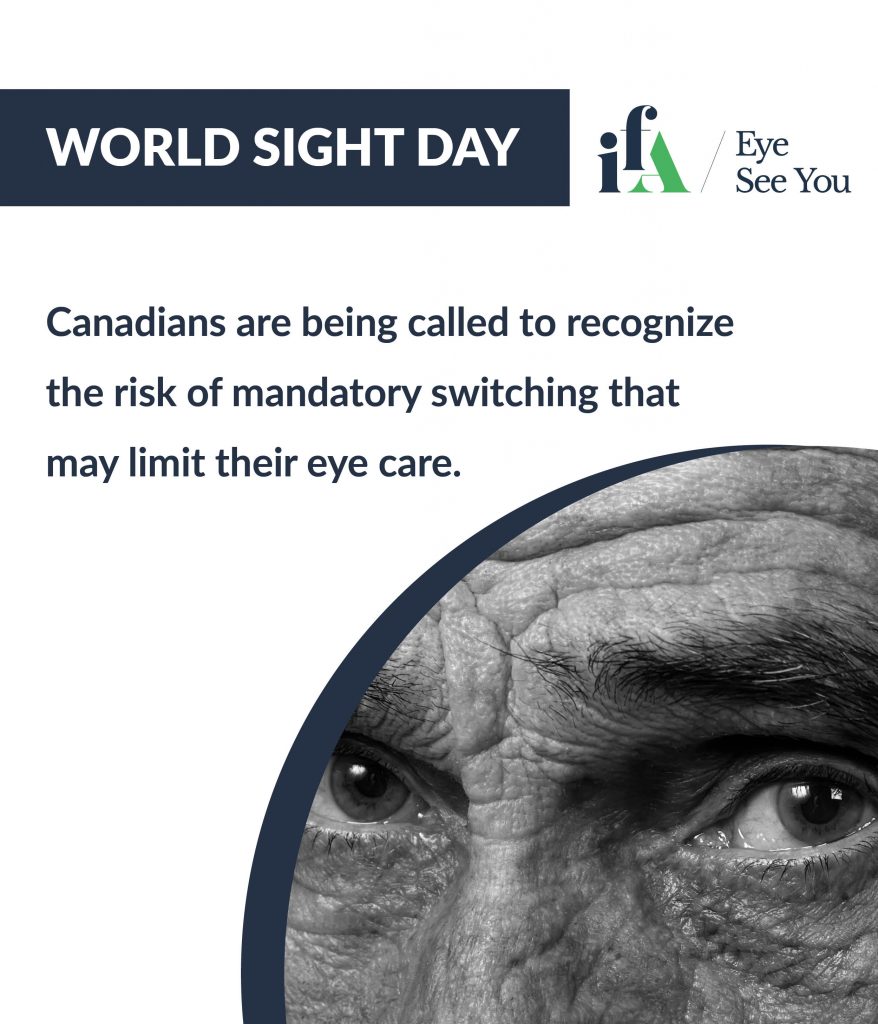 Maintaining and improving the vision of Canadians through appropriate therapeutic interventions is a good return on investment for society across all ages, and to mark this World Sight Day, IFA is proud to contribute to focusing attention on the national issue of eye health. Visit bit.ly/3So7JWW

Maintaining and improving the vision of Canadians through appropriate therapeutic interventions is a good return on investment for society across all ages, and to mark this World Sight Day, IFA is proud to contribute to focusing attention on the national issue of eye health. Learn more: bit.ly/3So7JWW #IFA #vision #health #biosimilars