IFA began operations in 1973 at a time when governments and civil society around the world were only beginning to understand population ageing trends.  The IFA was one of the first organizations to call for a World Assembly on Ageing, and after the first was held in Vienna in 1982, the IFA emerged as an NGO with a strong voice for older people at the United Nations (UN).

At the second World Assembly on Ageing, held in Madrid in 2002, IFA’s main UN representative at the time, Ms Helen Hamlin, worked together with other representatives and members of civil society to inform the development and adoption of the UN Madrid International Plan of Action on Ageing (MIPAA).  This marked a turning point in how the world addressed the challenge of building a society for all ages.

IFA obtained General Consultative status with the UN Economic and Social Council (ECOSOC) in 1995 and has formal working relations with several UN agencies, including the World Health Organization (WHO).

Under ECOSOC resolution 1996/31, NGOs in general and special consultative status with the Economic and Social Council must submit to the Committee on NGOs, a brief report of their activities every 4 years, known as the quadrennial report, which includes information about contributions of the NGO to the work of the United Nations.  The quadrennial review presents an opportunity for IFA to inform Member States about our activities in support of the United Nations, and at the same time, receive feedback from Member States on their programme of work as well as an official acknowledgement of their contribution as partners in development.

IFA has been deeply involved in the drafting of key initiatives at the UN, perhaps most notably, the UN Principles for Older Persons, advocating vigorously for older persons to be recognized in the UN Sustainable Development Goals and projecting and maintaining a strong voice on how best to protect the human rights of older persons globally.

A major focus in recent times has been supporting the agenda for a UN Convention on the Rights of Older People to protect the human rights of older persons.  Significant and ongoing work must be done to inform and educate all governments as well as civil society around the world of discrimination based on age that older people face every single day.

As a response to the growing global threat of inequity, the Open-Ended Working Group on Ageing (OEWGA) was established by the General Assembly by resolution 65/182 on 21 December 2010. The working group considers the existing international framework of the human rights of older persons, identifying possible gaps and determining how best to address them, including by considering, as appropriate, the feasibility of further instruments and measures.

At the United Nations, our team is a thoughtful group of professionals that are respected for their commitment and ‘ready for action’ philosophy.  We now have representatives in New York, Vienna and are expanding in Geneva.

Dr Stuen, Ms Hamlin, Dr Levy, Mr O’Neal, Dr Timmerman, Ms Zainoeddin (in New York) Dr Fitzgerald and Dr Scheil-Adlung (in Geneva) and Ms Stark (in Vienna) are tireless in their representation and advocacy at the missions, capitals and across sectors.

The IFA featured at side events, provided oral and written statements at Sessions of the UN Commission for Social Development; is on the executive of the NGO Stakeholder Group in the deliberations of the UN SDGs; represented at the UN High Political Forum on Sustainable Development, and at Session of the UN Open-ended Working Group on Ageing.  Just to note a few …

To prepare for these events, the UN Representatives work with the IFA Secretariat and other stakeholders to prepare statements and papers, meet with Permanent Missions of Member States, organize panel discussions, develop talking points, and network with influencers who might have interest in joining the efforts to call attention to ageing.

Stakeholder Group on Ageing Side Event at the High Level Political Forum | COVID-19: A Stress Test of Global Ageing 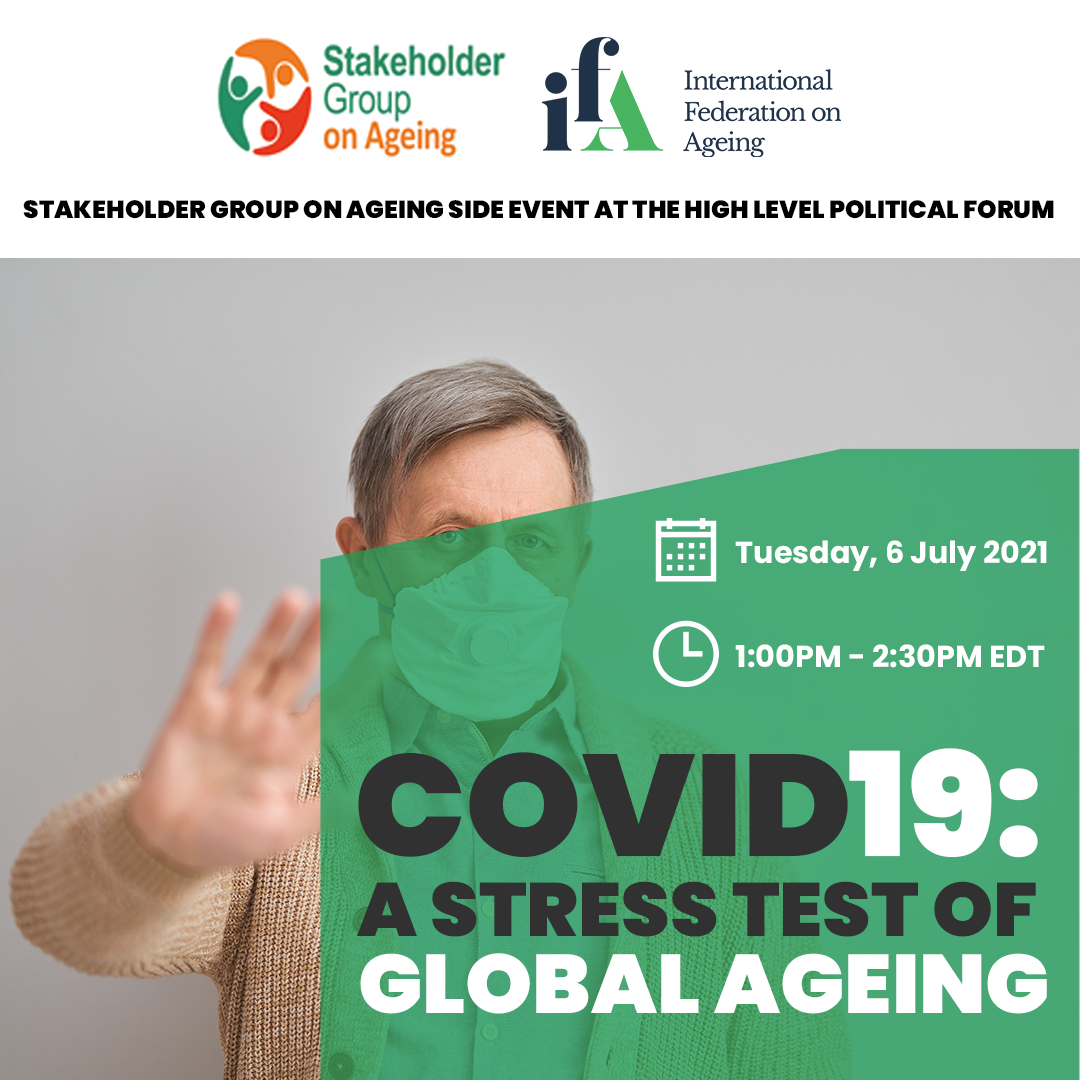 Older Persons have been among the first and hardest hit by the COVID-19 pandemic. In many respects the pandemic could be viewed as a test of how prepared/or not Member States are for the rapidly ageing society. Pandemics disrupt and have the potential to drive change.  Only a whole-of-society, whole-of-government approach can respond effectively to the dynamic challenges of this time.  In his report, the Secretary-General presented new research on how longevity has the power to transform labour markets, economies and societies. The recently released WHO Global Report on Ageism show that two people hold ageist attitudes towards older people.  This side event will focus on: Health and Long Term Care, Economic Development and Work and Technology in ageist environment during the pandemic.

Official Side Event at the UN OEWGA 11th Session

This event explores the disproportionately severe impact of the pandemic on older people across the globe through an international dialogue among a panel of international experts on ageing and human rights along with Ambassadors.

Discussions address the ways in which the human rights of older people have been violated and provide possible solutions to ensure that in the future older people are treated with dignity and respect as are individuals of all other ages.