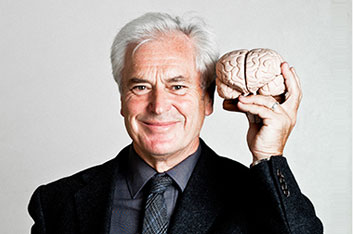 Psychology and neuroscience expert theorizing the future of cognitive rehabilitation

Ian Robertson is Professor of Psychology at Trinity College, Dublin and founding Director of Trinity College Institute of Neuroscience, and the first psychologist in Ireland to have been elected a member of the Royal Irish Academy. He also holds the positions of Visiting Professor at University College London, Visiting Professor at Bangor University, University of Wales, and Visiting Scientist at the Rotman Research Institute, University of Toronto. Robertson was previously a Senior Scientist at the MRC Cognition and Brain Sciences Unit at the University of Cambridge, where he was also a fellow at Hughes Hall.Robertson has published over 250 scientific articles in leading journals, including Nature, Brain, Journal of Neuroscience, and Psychological Bulletin. Ian has also contributed to public communication and understanding of science, contributing regularly to The Times and The Daily Telegraph, he was also a columnist for the British Medical Journal.[6] Robertson is author and editor of ten scientific books, including the leading international textbook on cognitive rehabilitation (Cognitive Neurorehabilitation), and two books for the general reader (Mind Sculpture: Unleashing Your Brain’s Potential and The Mind’s Eye: The Essential Guide to Boosting Your Mental, Emotional and Physical Powers), which have been translated into multiple languages. Robertson’s latest book is The Winner Effect: How Power Affects Your Brain, published by Bloomsbury (7 June 2012).Ian Robertson’s research focuses on behavioural change in people with impaired brain function, through linking novel rehabilitation strategies to underlying models of brain function. Methods which are now widely used and taught internationally include limb activation training for unilateral neglect, sustained attention training for unilateral neglect, and self-alert training for adults with attention deficit hyperactivity disorder. His current research includes several randomized controlled trials of different types of cognitive training with elderly, schizophrenic and ADHD patients. He has also developed with others a widely used method for frontal lobe impairment known as Goal Management Training.Ian Robertson has also developed a theoretical approach to cognitive rehabilitation and originated some very widely used tests of attention, and has demonstrated sensitivity to key clinical conditions, as well as to underlying molecular genetics.

In his highly enjoyable and interesting book on modern stress research, the psychologist and neuroscientist Ian Robertson cites the radical consolation famously offered by Nietzsche: what does not kill me makes me stronger...

2016Stress is one of the leading global causes of disease and premature mortality. Despite this, interventions aimed at reducing stress have low adherence rates. The proliferation of mobile phone devices along with gaming-style applications allows for a unique opportunity to broaden the reach and appeal of stress-reduction interventions in modern society. We assessed the effectiveness of two smartphone applications games combined with biofeedback in reducing stress.

2016This study is aimed to investigate neuropsychological deficits in adult ADHD.

2015The ability to revise one's certainty or confidence in a preceding choice is a critical feature of adaptive decision-making but the neural mechanisms underpinning this metacognitive process have yet to be characterized. In the present study, we demonstrate that the same build-to-threshold decision variable signal that triggers an initial choice continues to evolve after commitment, and determines the timing and accuracy of self-initiated error detection reports by selectively representing accumulated evidence that the preceding choice was incorrect. We also show that a peri-choice signal generated in medial frontal cortex provides a source of input to this post-decision accumulation process, indicating that metacognitive judgments are not solely based on the accumulation of feedforward sensory evidence. These findings impart novel insights into the generative mechanisms of metacognition.

2015Cognitive deficits are a core feature of schizophrenia and related psychotic disorders and are associated with decreased levels of functioning. Behavioural interventions have shown success in remediating these deficits; determining how best to maximise this benefit while minimising the cost is an important next step in optimising this intervention for clinical use.

Neuropsychology of Attention of Awareness