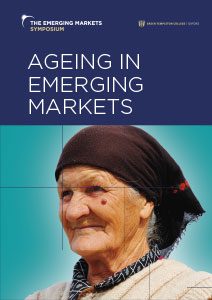 This report describes the outcomes of a 2015 symposium on Ageing in Emerging Markets convened by the Emerging Markets Symposium at Green Templeton College, Oxford. It focuses on the causes and consequences of rising longevity in the largest and most successful emerging markets; explains why they must wake up to the realities of getting older; assesses the economic and social and health implications of population ageing; and relates ageing associated issues to the economic cultural and political diversity of emerging markets.