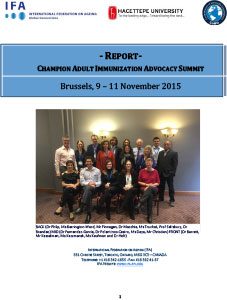 To ensure the sustainability of health systems to support a growing global ageing population, there is an urgent and real need for a new narrative around health promotion and disease prevention across the life course including older age.  Until quite recently there has been a tendency to consider older people as a social and economic burden however the evidence increasingly disputes the tones of this kind of discrimination.

Notwithstanding the reality that older people contribute significantly within the extended family as well as to community and society, health promotion and prevention strategies that target older adults do not appear to have been a governmental priority in many places.

By championing the improved uptake of adult vaccinations, societies as a whole will take the critical step to ensure that everyone has a chance to maintain and/or improve their health, well-being and functional capacity in later life.

It is important now, more than ever before to identify and bring together experts (champions) in a coalition from all levels of government, medicine, academia, NGOs, industry and public to unite to learn from one another toward a common purpose.

In the spirit of being a strong and unified voice, the Adult Immunization Advocacy Champion Summit was convened by the International Federation on Ageing (IFA) in collaboration with the Confederation of Meningitis Organizations (CoMO) and Hacettepe University in Brussels, from the 9th – 11th November 2015.

The Summit comprised of experts and dedicated professionals who want to work together to make a significant contribution toward improving lives through advocacy and/or public health initiatives in the field of adult vaccinations.

The Summit concluded with a broad agreement to come together under the umbrella of the World Coalition on Adult Vaccination to improve the rates of adult vaccination globally.