WHO Study on global AGEing and adult health (SAGE) 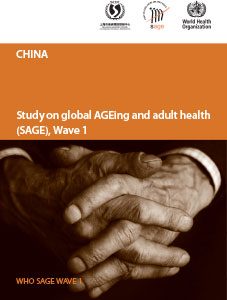 Findings from a multi-country study in lower-middle and upper-middle income countries, covering over 40% of the world’s population aged 50+ years, have provided some intriguing insights, but also raise more questions:

The Study on global AGEing and adult health (SAGE) is part of a Longitudinal Survey Programme in WHO’s Multi-Country Studies unit. The main SAGE surveys compile comparable longitudinal information on the health and well-being of adult populations and the ageing process from nationally representative samples in the following six countries:

Each country’s national report is a descriptive summary of results, including this report of SAGE Wave 1. Wave 2 follow-up has been implemented in China, Ghana and Mexico, with the remaining three countries to be completed by late 2015 and Wave 3 follow-up is planned to start in 2016. More information is available on the WHO website.