The High Cost of Low Vision: The Evidence on Ageing and the Loss of Sight 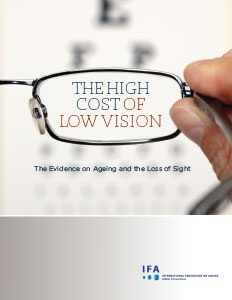 The International Federation on Ageing (IFA) has released a new report describing the health, social and economic burdens of vision loss on a global society that is rapidly ageing. The report calls for increased public education and awareness programs, improved public policies and greater integration of preventive eye health interventions into public health systems.

The report, titled “The High Cost of Low Vision: The Evidence on Ageing and the Loss of Sight,” highlights that vision loss is no longer an inevitable part of the ageing process, as people can now age with strong, healthy vision, given 21st-century innovations in diagnosis, biomedicine, nutrition, technology and preventive care. “The economic implications are equally huge as we now have it in our grasp to delink vision loss from ageing, which will have great impact on active, productive and more enjoyable ageing. This shift in the traditional perception of ageing is truly transformative,” said Jane Barratt, BSc, MSc, PhD, Secretary General of the IFA. “As 80 percent of vision loss is preventable, it is our ethical responsibility and a public health imperative that we take action now.”

“As the 21st century’s seminal challenge of population ageing leads to increasing prevalence of deteriorating vision, it brings about huge social, personal and economic consequences,” said Kathy Spahn, President and CEO of Helen Keller International. “This report is both timely and critical as a tool for raising awareness of and driving solutions for preventable vision loss, which can have a positive and profound impact on economic growth and the human condition.” The over-60 population is expected to reach 2 billion by mid-century. As this cohort rapidly grows to become the largest population segment of many societies globally, rates of preventable vision loss are also soaring. Today, 285 million people around the world are visually impaired, including 39 million who are totally blind, and that number will explode without preventive measures. The direct costs of vision impairment worldwide are estimated to reach $2.8 trillion by 2020, and the indirect costs will add another $760 billion.

The report emphasizes that measures to prevent vision loss are cost-effective and calls for urgent attention in key areas: