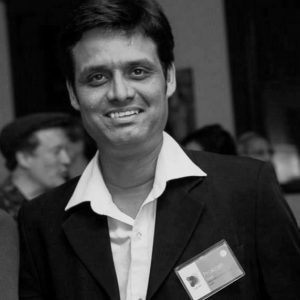 Dr. PrakashTyagi, MD, PGDGM, is the Executive Director of GRAVIS and Founder-Director of GRAVIS Hospital. In his academics, he has studied Medicine and Geriatrics. He has also been the recipient of a Fulbright-Humphrey Fellowship to study global health at UNC Chapel Hill, received a Ford Fellowship to study non-profit management at Columbia University in New York and has studied public policy through a Fleishman Fellowship at Duke University.

He has supported various non-profits working on health and development aspects nationally and internationally. With his global health experience, he has contributed to various international forums and has written frequently on major global health issues with greater emphasis on healthy ageing and priorities.

As the Executive Director of GRAVIS, he has been leading the organization since last 16 years. GRAVIS works extensively in the Thar Desert of India and in other regions, with key focuses on water security, food security and community health. GRAVIS reaches out to about 1.7 million people living in poverty with its work and has helped formation of over 4,000 Community Based Organizations including Older People Associations and Self Help Groups.

He had founded a major hospital and currently directs its administration which is an important medical centre in the Thar Desert of India. Dr. Tyagi is an active development practitioner and public health professional and has contributed significantly in the fields of healthy ageing, HIV, TB and occupational health through his writing, research and field work. He is also a visiting faculty at Jodhpur School of Public Health in India and a Clinical Professor at the School of Global Health and Medicine of University of Washington, US.