Free and equal across the life course?

The Universal Declaration of Human Rights turns 70 years old today – Human Rights Day.  This document was adopted by the General Assembly of the United Nations (UN) on 10 December, 1948 and sets out the common standards of fundamental human rights to be universally protected, with 30 ‘articles’ spelling out specific rights.  Visit this interactive page to learn about each of these articles (including the rights to social security, health, education, and work).

The fight for further protections for older persons

While the Universal Declaration is an important tool, some demographic groups experience added discrimination and thus require extra protections to further ensure their rights are met, including older persons.  Some existing population-specific international human rights instruments include:

There is still no legally binding international human rights instrument that focuses specifically on older persons.

In 2010, the Open-Ended Working Group on Ageing (OEWG) was established to strengthen the protection of human rights of older people – the first official process for UN Member States, non-governmental organizations (NGOs) and national human rights institutions (NHRIs) to examine how to do this better. Since then, nine sessions have been held where the OEWG examines existing international frameworks and identifies gaps and strategies for improvement.  During the 9th OEWG, some willingness to discuss the potential of a convention was expressed but still no concrete steps towards drafting an international instrument with implications for legislation. 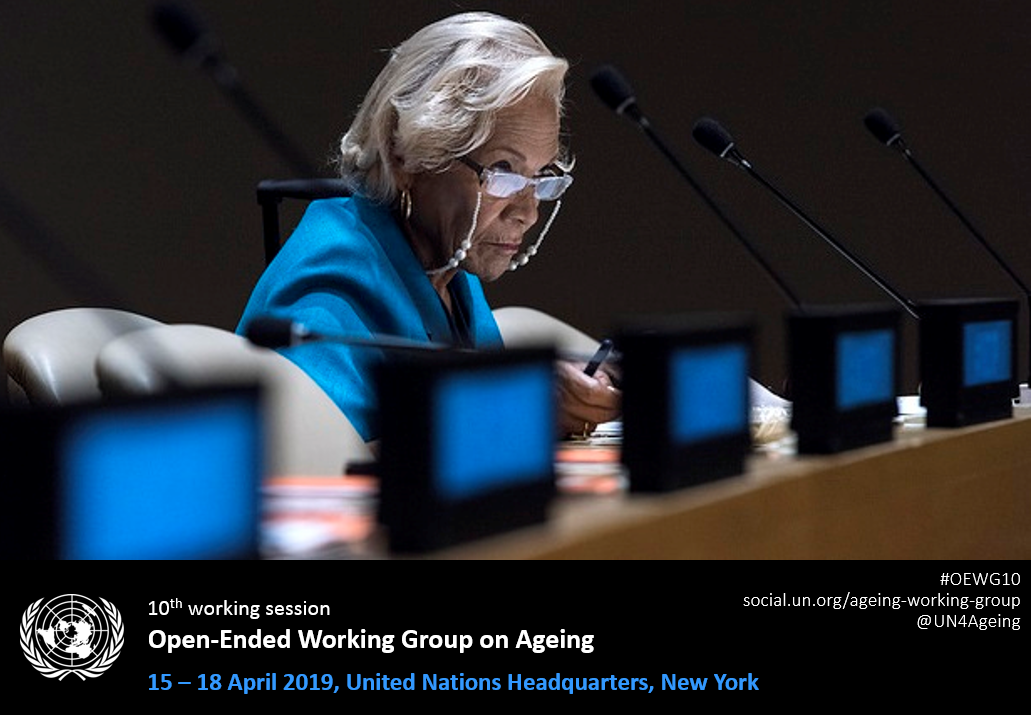 OEWG meetings will now be held annually as part of the UN Calendar – a positive sign.  The upcoming 10th OEWG will be held on 15-18 April, 2019 at the UN Headquarters in New York (see below), where deliberations will continue with a specific focus on the rights to social security and education.   NGOs and NHRIs can submit inputs on these focus areas as well as the topics of autonomy and independence and long-term and palliative care (deadline 1 February 2019; see instructions here).

Civil society organizations, including the IFA, have pushed for governments to address the changing needs of ageing societies and led the charge for the first World Assembly on Ageing in 1982 in Vienna.  After this, the IFA emerged as an NGO that would become one of the strong voices for population ageing at the UN.

At the second World Assembly on Ageing, held in 2002 in Madrid, the IFA’s main UN representative, Helen Hamlin together with other IFA representatives informed the development and adoption of the UN Madrid International Plan of Action on Ageing (MIPAA). This marked a turning point in how the world addresses the challenge of building a society for all ages.  Since then, the IFA has continued to advocate strongly for older persons to be recognized in development frameworks including the Sustainable Development Goals and the World Health Organization’s 13th General Programme of Work.

How can civil society continue to push forward so that the rights of older persons are promoted and protected?

Let’s continue to #StandUp4HumanRights and call for change and commitment so that people can continue to maintain their rights as they get older.