Live from New York: What’s Happening in Ageing at the United Nations in 2019?

The United Nations, founded in 1945, is currently made up of 193 Member States.  You might ask “where does ageing fit into the UN’s mandate?”  Actually, all of the issues mentioned above impact older persons.  While the UN has a unit that focuses on ageing, the needs and concerns of older persons are often not top of mind as the Member States grapple with global problems and solutions.

That’s where the IFA Representatives to the UN come in.  Working with other NGOs, they advocate for the creation of an age-inclusive society where no one is left behind.  A major focus for the next several years is to work toward a universal legally-binding convention to protect the human rights of older persons.  This isn’t as easy as it sounds as much work has to be done to inform and persuade the UN Member States, offices within the UN and other NGOs that the issues facing older persons deserve special attention and action in order to promote a life course perspective.

How Does IFA do its work at the United Nations?

IFA has five seasoned professionals from the field of ageing who have the role of IFA’s UN Representatives (in the photo from left to right): Frances Zainoeddin, Dr.  Cynthia Stuen (Main Representative), James O’Neal, Valerie Levy, and Dr. Sandra Timmermann and Frances Zainoeddin.  Aligned with the IFA vision, goal and priorities their job is to advocate for ‘ageing’ to be on the UN agenda, while harnessing and mobilize support for strategies into action. 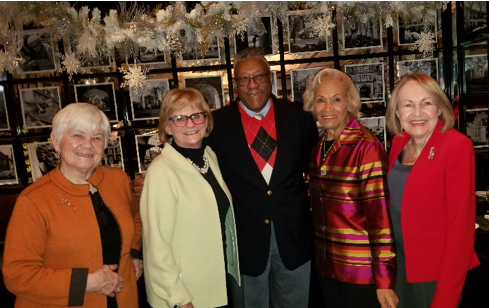 There are several major convenings that IFA and other NGOs focus on each year.  To prepare for these events, the UN Representatives work with the IFA headquarters and other stakeholders to prepare statements and papers, meet with Permanent Missions of Member States, organize panel discussions, develop talking points, and network with influencers who might have interest in joining the efforts to call attention to ageing.  Two important meetings are coming up in the next few months.

The first is the 57th Session of the UN Commission for Social Development, to be held 11-21 February 2019.  The Commission is the advisory body responsible for the social development pillar of global development.  The theme this year is addressing inequalities and challenges to social inclusion through fiscal, wage and social protection policies.  The emerging issue to be covered is the empowerment of people affected by natural and human-made disasters to reduce inequality: addressing the differential impact on persons with disabilities, older persons and youth.

IFA is also sponsoring a side event during the Session on 12 February 2019 — on “Fostering Resilience Across the Life Course Through Universal Health Coverage.”  The objective of this side event is to showcase UHC as a policy measure for equitable promotion of health and resilience across the life course.  Expert presentations and discussions will illustrate how aligning health systems to the needs of older persons can help support sustainable development, including disaster risk reduction.  Dr. Jane Barratt will be the moderator, while the speakers will be:

Click here to view the full flyer for more details.

The second major undertaking that IFA UN Representatives are involved in in 2019 is the Tenth Session of the Open-Ended Working Group on Ageing (OEWGA), on 15-18 April 2019.  The mission of OEWGA is to consider the existing human rights treaties in the context of older persons, identify possible gaps and how best to address them, in order to decide the feasibility of elaborating a separate legal instrument to protect the rights of older persons. 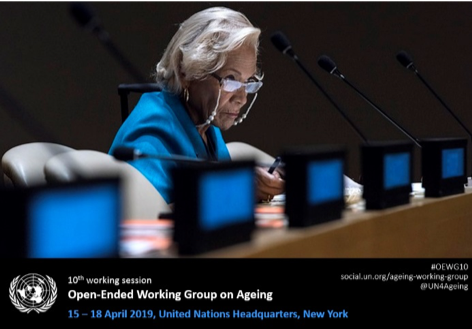 The two focus areas for this session are “social protection and social security including social protection floors” and “education, training, lifelong learning and capacity-building.” The OEWGA will also be considering the possible “normative elements” that derive from a human right (the standard or norm), with specific discussion of the two focus areas of the 9th session, namely “autonomy and independence,” and “long-term and palliative care.”

Recognizing strength in numbers, IFA has invited several national NGO members to provide comments to the Call for Inputs, which would then be provided as single submission per focus area.  IFA is also planning to cosponsor a side event in collaboration with the Stakeholders Group on Ageing of Africa.

There are events and ongoing activities that are happening at the UN throughout the year. IFA is right there to provide expertise, support and impact in preparations for the following, to name a few:

In addition to IFA, all NGOs can be involved in advocating for a life course approach to international policy and in working toward a convention for the human rights of older persons.  Your voices need to be heard.