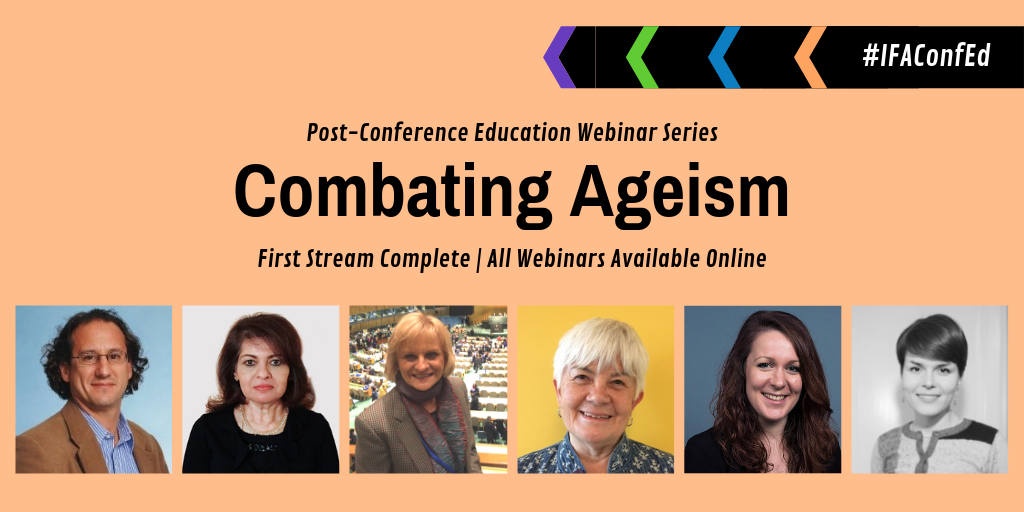 As the end of March approaches, so does the end of the first stream of the IFA Post Conference Education webinar series: Combating Ageism.  While many people have a general idea of what ageism is, defining the term and describing the varied ways it manifests, is often quite complicated.

Ageism is the various stereotypes, prejudices and discrimination against people on the basis of their age.  For all people, particularly those who are older, ageism presents many challenges and impacts health and wellbeing at all levels, individual to systemic.  Over the last three months, the webinars that were presented discussed many ideas which together elucidated not only what ageism looks like, but how to combat it around the world.

The inaugural webinar set the tone of the series, discussing the concerns of civil society and governments around human rights and ageing, as well as the importance of creating a convention to secure the rights of older people.  In February, rather than addressing ageism across all disciplines, the webinar focused specifically on the urgent need to combat ageism to improve access to employment, and the five actions that employers can take to become age-friendly.  Concluding the stream was a webinar that reflected on the importance and learnings of the #AgeingEqual initiative and taught attendees’ strategies that can be implemented when executing campaigns to combat ageism.

It is clear that the pervasive nature of ageism has negative impacts on older persons and society and as the Post Conference Education webinar series transitions into its next theme, Enabling Functional Ability, these lessons learned will be essential in framing the discussion to come.

Stay tuned for announcements on the next three webinars in the series focused on Enabling Functional Ability. For more information about these streams and the content being discussed, consider attending the IFA’s 15th Global Conference on Ageing.